The former spotted emails obviously targeting Mac users, as the matiriyal.zip file in the attachment contains a JPG photo and an OS X app, which turns out to be a new version of an previously spotted backdoor for i386 and PowerPC Macs, dubbed “MaControl”. 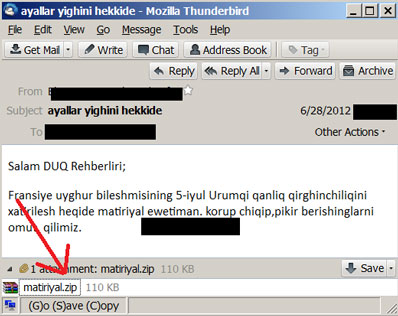 Once the “app” is executed, it installs itself and contacts a C&C server located on an IP address in China. The backdoor then allows the attackers to list files, extract and send them to the remote server and, in general, to run a number of commands on the affected machine.

The attacks spotted by Alien Vault are very similar, but target PC users.

Again, the users receive an email with an attached zip file, which contain an image and a winrar file. The latter contains a malicious binary that copies itself into \Documents and Settings\USER\Local Settings\Temp\.

It then drops a .dll file that injects itself into the explorer.exe process, and then proceeds to contact the same C&C server as in the previous example.

This particular backdoor is the infamous Gh0st RAT and, as the researchers point out, is often used in attacks targeting Tibetans, Uyghurs and other groups on the ASEAN zone.