Much has been said and written about the UK’s Digital Economy Act, but most Internet users still know just one thing about it: that it will eventually end with ISPs sending out notifications to Internet pirates, who will be forced to stop their illegal activities or suffer consequences.

This email campaign started only days after Ofcom – the regulator and competition authority for the UK communications industries – released its revised Initial Obligations Code proposal, which details how the aforementioned notification system is going to work.

Even though Ofcom stated that it expects the first notification letters to be sent in early 2014, online scammers bet on the fact that not many users keep close tabs on the situation and took it upon themselves to impersonate the enforcers of said act by sending out emails accusing the recipients of pirating various content and trying to make them pay a non-existent penalty: 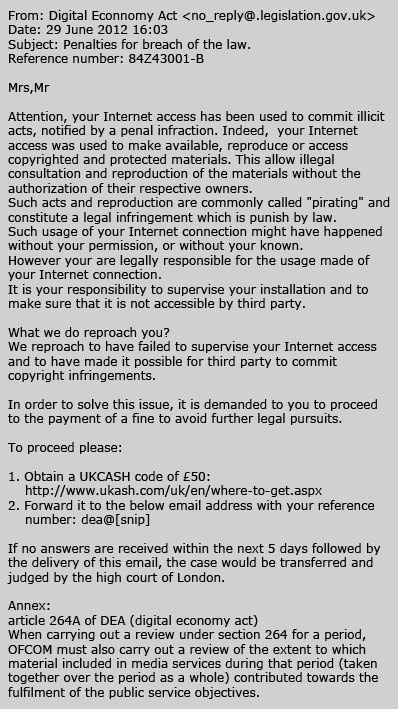 Experienced users are likely to flag the email as scammy due to it being very poorly worded, containing many spelling errors, it being an email and not an actual, physical letter, and asking the users to pay the fine via Ukash – an e-payment system popular with scammers.

Unfortunately, there are always users who are new to the Internet, who scare easily, and aren’t yet able to spot scams right off the bat. If you know some of them, this is the perfect moment for warning them about this one.