Panda Security launched Panda Cloud Antivirus 2.0 for both its Free and Pro editions. The new version is fully compatible with Windows 8 Release Preview and incorporates a new smart community-based firewall and many other improvements. 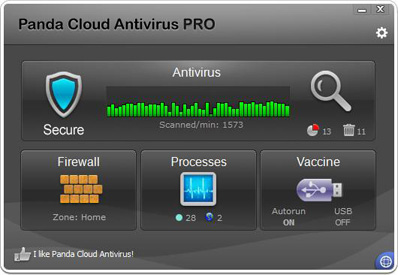 The new Panda Cloud Antivirus Free Edition optimizes security by adding behavior-based scanning technologies, a feature previously only available in the Pro Edition. It incorporates a series of improvements aimed at defending users against an increasingly sophisticated and diverse set of threats such as:

Panda Cloud Antivirus 2.0 removes all malware traces after neutralization which increases its disinfection capabilities. Additionally, it has a lower impact on system performance, and scans more than 50% faster than earlier versions of the program in on-demand scans.

Panda Cloud Antivirus Pro Edition includes all the features of the Free Edition plus a new smart community-based firewall that automatically stops intrusion attempts and data leakage. In line with the product’s philosophy, the firewall minimizes user intervention by automatically managing application permissions based on the real-time knowledge gathered from Panda Security’s global user community.

The new firewall incorporates an intrusion detection system and adapts its behavior based on the network type the user is connected to such as home, work, or a public place.

In addition, the Pro Edition includes 24×7 technical support and automatic USB vaccination against infections with autorun-based malware for $29.99.