Rogue Facebook apps still occasionally pop up, even though they are not nearly as ubiquitous as they used to be.

More often than not they supposedly show users who has been viewing their profile, but these latest ones pose as legitimate WhatsApp Messenger apps.

WhatsApp Messenger is a popular cross-platform instant messaging application for smartphones, and while it has a Facebook page, it does not have a Facebook app, and this lack prompted cyber crooks to fill the demand gap: 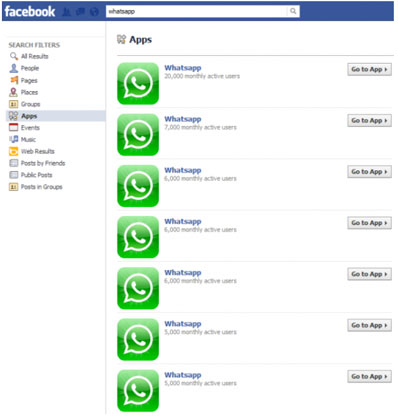 “Now I’m an old man and I don’t really understand this Faceboook thing, but I’m pretty sure there aren’t supposed to be this many WhatsApp Facebook apps on its platform in the first place,” says TNW’s Robin Wauters, and tells about being introduced to one of those apps via a request by a Facebook friend.

Both the request and the app page look pretty legitimate at first glance, and those who fall for the scheme and use the app have their basic personal information harvested, invitations sent to their friends, and finally get rerouted to shady websites offering potentially malicious software for download.