Malware peddlers are taking advantage of the fact that the next version of Apple’s popular iPhone is due to be released soon by targeting users with specially crafted spam emails: 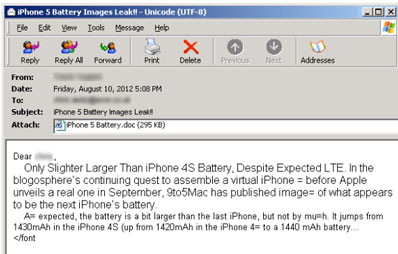 The emails supposedly contains details about and images of the “iPhone5 battery” in an attached .doc file.

But, according to Symantec, the file is rigged to exploit an only recently patched Adobe Flash Player vulnerability and contains hidden malicious .swf files, which act as droppers for other files – among them a backdoor Trojan.

As always, users are advised against opening attachments contained in unsolicited emails, no matter how interested they are in their supposed contents.