Web application security incidents have become increasingly common and expensive, with the majority of companies experiencing at least one breach in the last 18 months and many companies losing hundreds of thousands, if not millions, of dollars as a result, according to Forrester Consulting. 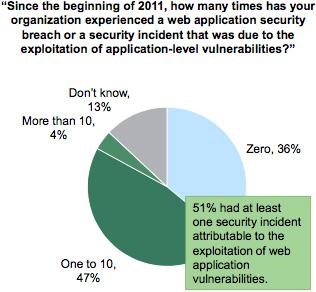 At the same time, the study found that the majority of companies have yet to implement secure development practices, most often citing time-to-market pressures, funding and the lack of appropriate technologies suitable for use during development as their primary roadblocks.

Security incidents are prevalent and expensive: According to the survey, just over half (51 percent) of respondents had at least one web application security incident in the prior 18 months. Among those reportingincidents, 18 percent put their losses at more than $500,000 while another 8 percent saw losses in excess of $1 million. Two reported losses of more than $10 million.

Code volumes, business demands sideline security: A vast majority of the respondents who experienced a breach said they lack the right security technologies suitable for development (71 percent), that security processes cannot scalewith the volume of code they produce (79 percent), and that they lack the funding to invest in security (71 percent). Almost half of all respondents (41 percent) said time-to-market pressures prevented them from pushing securityinto development.

Too few companies employ secure development practices: Less than half (42 percent) of respondents follow secure coding guidelines, only 28 percent use a library of approved or banned functions and barely a quarter (26 percent) utilize threat modeling. Additionally, only 17 percent test during the development cycle and more than half do not audit their code before integration testing.

Developers struggle with legacy security tools: According to developers surveyed, the top three challenges to working with current web application security tools include the lack of integration with their current development environment, the need for too much security expertise and high false positives. By comparison, some security practitioners agreed that integration was a primary challenge, but none believed security tools were complex or required too much expertise to use.

As companies grapple with a more sophisticated threat landscape, they will have no choice but to improve application security. If development does not integrate security into its practices from the earliest stages, addressing it later may not only be more expensive, but could be ineffective altogether.