Not satisfied with just showing the fake FBI note, the criminals behind one of the many ransomware campaigns going on at the moment are trying to assault the users’ other senses as well. 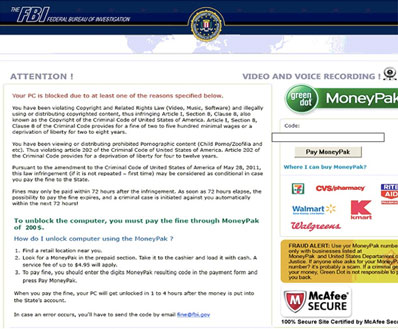 According to Trend Micro researchers, the malware is delivered along with a non-malicious MP3 file that gets copied in the current directory of the malware, and it repeatedly informs users that their system is blocked because of a certain violation on the federal law they committed.

The users are asked to pay a “fine” of $200 in order to get their computer unblocked, and to execute the payment via MoneyPak, which is (conveniently) available in many of big retailers in the United States.

It’s difficult to tell how effective this new approach is. I imagine that anyone would be uncomfortable with their computer blaring out that it has been blocked due to copyright infringement and distribution of illegal pornographic content, and would be more easily convinced to part with the money.