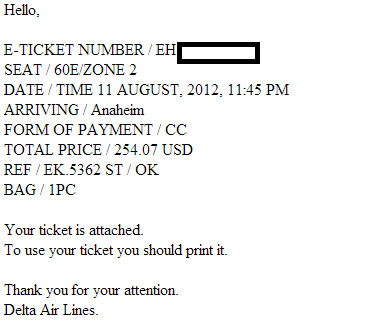 The email claims that the ticked for the flight booked by the recipient is attached to the email, and that it should be downloaded and printed out.

But the attached Delta_A_Ticket_Print_Document_3477.zip is actually a variant of the infamous Bredolab Trojan, whose main goal is to download more malware on to the compromised computer, and this particular variant is currently detected by only 3 of the 43 AV solutions used by VirusTotal.

Still, there’s also some good news. According to Webroot’s Dancho Danchev, this particular campaign is a complete failure for the attackers, as the attached archive file is corrupted and won’t actually work on the victims’ computer.

It’s only too bad that failed attempts such as this aren’t the norm.