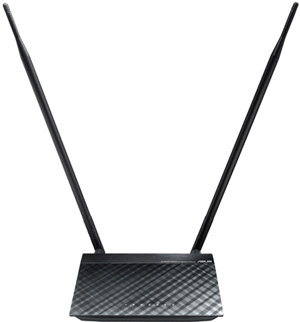 It extends Wi-Fi range by up to 300%, at the same time offering 3-in-1 utility as a router, access point, and range extender. The user-friendly interface also supports up to four separate networks, with different bandwidth and access privileges.

The RT-N12HP utilizes a custom hardware architecture that augments wireless transmission and signal quality with detachable 9dBi high-gain antennas and a discrete signal power amplifier. These create a major increase in 802.11n wireless coverage, up to 300% longer-range compared to standard N300 routers.

At the same time, the improved hardware ensures a more stable and consistent signal. The RT-N12HP is therefore a highly viable choice for homes and small businesses that want complete coverage via a single networking device.

Included in the user-friendly interface, EZ Switch offers a quick software tool that alternates between the RT-N12HP’s three main operating modes. With a single touch, customers can select standard router usage, access point mode (adding Wi-Fi to an existing wired-only modem/router), or range extender mode, where the RT-N12HP works in conjunction with another wireless router to expand coverage even further.

The RT-N12HP supports up to four distinct networks, or SSIDs. It uses dynamic bandwidth allocation, giving administrators the ability to control each network’s access privileges and bandwidth quota. This means the primary network can operate alongside guest networks while experiencing minimal slowdown.

The RT-N12HP also allows customers to offer guests at home or the office internet access with graded privacy and usage rights. For example, the primary host/administrator network can have full access rights with priority bandwidth, while guest SSIDs may have controlled access and bandwidth.

The flexible design means passwords do not have to be shared, and facilitates easier parental controls. Setup is once more via the intuitive interface, taking mere minutes to accomplish.