If you are an Android user but you want to try out some of Apple’s most sought-after apps, you might be surprised to know that Apple has been seemingly offering them for sale on Google Play.

I say seemingly because it was not actually Apple – although the developer’s name said “Apple Inc” and the contact email address android@apple.com: 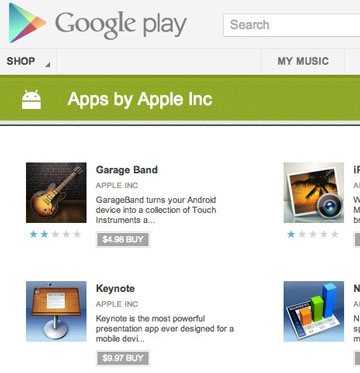 The scheme was first spotted by a Redditor who asked other Redditors for advice on whether what he was seeing was true.

The question was picked up by Sophos’ Graham Cluley who managed to verify the claim before Google reacted and took the apps down and presumably shut down the scammer’s account.

According to him, among the bogus apps were iPhoto, iMovie, Numbers, Pages, Keynote, and Garage Band, and they were sold for amounts ranging between $4.98 and $9.97.

“What isn’t clear is whether this was a scam to simply pilfer money from unsuspecting Android users hoping to get some Apple-created apps on their devices, or whether it was a more sinister attempt to infect Android phones with malware,” he points out. Technically, it could be both, but my money is on the former.

I must admit that the scheme was pretty well executed – the usual advice of making sure that the name of the app developer actually corresponds to the legitimate one and of checking the number of downloads would not have helped much in this case.

This incident just goes to show that even when buying apps from official online stores you should use your judgement to assess whether the offered app is legitimate or not, and be prepared to go a little out of your way and comb the Internet for clues. In this case, a simple search could have revealed that Apple did not, in fact, start offering its software on Google Play.

Google, on the other hand, has proved once again that it still has quite a way to go when it comes to mechanisms for detecting bogus or malicious apps on its official online store.