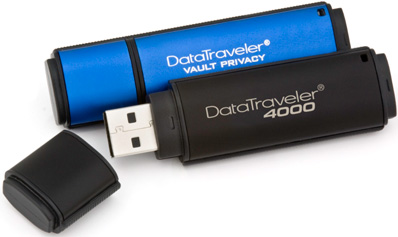 Kingston’s enterprise-class, ultra-secure DT4000 and DTVP can be customized with ClevX DriveSecurity powered by ESET’s heuristics-based anti-virus technology. End users will be protected wherever they roam or plug in, knowing their confidential data is fully protected from malware that can spread via removable media.

With the constantly evolving threat landscape and an expanding mobile workforce, protecting data at all times has never been more challenging or critical. Lost or stolen Flash drives remain a massive point of exposure for sensitive data if they are not encrypted, thus opening a host of negative consequences including non-compliance, fines, financial loss and lack of customer and partner confidence and trust. More recently, removable media has been at the center of major security events ― as a vehicle of infection in the case of the infamous Stuxnet worm, and as a data exfiltration vector associated with the Flame virus.

The compromise of classified data on maximum security, non-Internet connected PCs via malware hidden on USB drives has also been reported. In one case stemming from Flash drives found at a military location, the drives were infected with malware which, once plugged into a computer, secretly collected data based on specific keywords. The documents were hidden within a secret folder on the USB drive until it was connected to an Internet-enabled computer again, at which point the documents were sent to certain IP addresses traced back to the attackers’ home country.

“Portable media is a common source of malware infection,” said Andrew Lee, CEO, ESET North America. “People often carry sensitive personal files on their USB drives and they often don’t realize that their drive can be infected when plugged into a computer, and then that infection can be transferred to other machines. Together with Kingston and ClevX, we can offer a solution which keeps the contents of USB Flash drives safe and malware-free, and prevents malware from spreading via removable media.”

Corporate end users can easily and immediately access ESET’s malware protection upon initialization of the Kingston secure USB Flash drives with a strong password. There is no need for management configuration, making it easy for the end user and saving the IT department valuable setup time. Upon logging in and entering a password, the ESET engine scans for spyware, Trojans, worms, rootkits, and viruses, without conflicting with the host resident anti-virus software, then notifies the user to take action if malware is detected. It also provides automatic hourly updates when an Internet connection is available.