Yahoo has finally decided to offer to the users of its popular Yahoo! Mail service the option of encrypting their entire webmail session by switching on the Secure Sockets Layer (SSL) cryptographic protocol, the Electronic Frontier Foundation reports.

The protocol is meant to prevent attackers to eavesdrop on the users’ electronic communication, especially when using public wifi hotspots, and its use is signalized by the HTTPS expression preceding the URL.

Unfortunately, Yahoo hasn’t switched on SSL by default, but has left to users the option to enable it in their accounts. Yahoo! Mail users are advised to do so in their account Options (click on the screenshot to enlarge it): 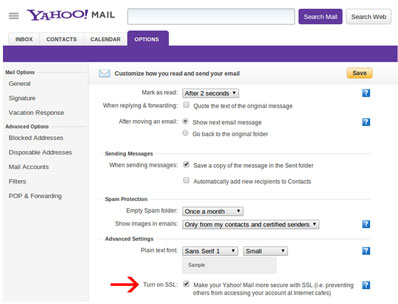 Of the largest webmail providers, Google (Gmail) and Microsoft (Hotmail) have made the same move in 2010 – Google in the wake of the Aurora attacks, and Microsoft started with HTTPS enabled for login soon after.

It now remains to be seen if AOL will finally follow suit.