Based on survey data provided by network operators from around the world, this annual report is designed to help network operators make more informed decisions about their security strategies as they relate to the integrity of mission-critical Internet and other IP-based infrastructure. 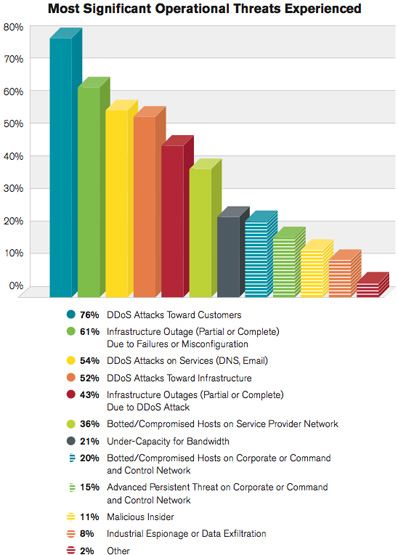 Advanced Persistent Threats (APTs) a top concern for service providers and enterprises – Advanced threats are a well-established problem for enterprise network operators. This year’s survey found an increased level of concern over “botted” or compromised machines on provider networks. The increase in botted hosts is not surprising given the number and complexity of malware variants that exist, their rate of evolution and the consequent inability of Intrusion Detection Systems (IDS) and Anti-Virus (AV) systems to fully protect them. Looking ahead, there is even more concern about APT, industrial espionage, data exfiltration and malicious insiders.

Data centers and cloud services are increasingly victimized – 94 percent of data center operators reported attacks, and 90 percent of those reported operational expenses as a business impact.
As more companies move their services to the cloud, they now have to be wary of the shared risks and the potential for collateral damage. This correlates directly to the types of companies being targeted by attackers, with e-commerce and online gaming sites increasingly targeted.

Mobile providers continue to be reactive – 60 percent do not have visibility into the traffic on their mobile/evolved packet cores.

There has been limited improvement in visibility or investment in detection and mitigation solutions specific to the mobile network since the last survey. The economics of consumer subscriber networks do not motivate providers to implement security until a problem occurs.

The number of mobile devices, along with the sophistication and power of these devices, continues to increase year over year. It is only a matter of time before botnets and DDoS become more prevalent within mobile infrastructure.

BYOD trend creates new challenges – 63 percent allow BYOD devices on the network, however only 40 percent have the means to monitor those devices. Additionally, only 13 percent actively block access to social media applications and sites. Clearly, BYOD is creating more entry points for hackers to enter the network.

DNS infrastructure remains vulnerable – 27 percent experienced customer-impacting DDoS attacks on their DNS infrastructure—a significant increase over the 12 percent of respondents from last year’s survey. 71 percent of respondents reported good visibility at Layers 3 and 4 but only 27 percent reported Layer 7 visibility. This lack of visibility coupled with a lack of dedicated security personnel create an ideal environment for attackers to exploit. Attackers now have many targets from which to create reflection attacks.

IPv6 deployments becoming pervasive – 80 percent indicated that they either have already deployed IPv6 or have plans to deploy within the next 12 months.

In last year’s WISR, survey respondents acknowledged the first reports of IPv6 DDoS attacks on production networks. Even though IPv6 DDoS attacks were being reported, IPv6 security incidents were still relatively rare at that time. Considering that 75 percent of survey respondents are Service Providers, it’s no great surprise that IPv6 deployments are accelerating today. This opens new opportunities for attackers to bypass network controls by switching between IPv4 and IPv6 networks.