Directors, vice presidents and other top management of companies in the aerospace industry and U.S. government and defense contractors have recently been targeted with a highly believable spear phishing campaign (click on the screenshot to enlarge it): 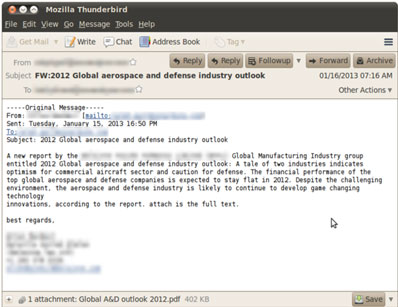 According to Symantec researchers, the content of all the sent out emails was the same, and the attackers aimed at making it seem as though the email originally came from the company that authored the report, then forwarded by employees.

Once downloaded and run, the attached malicious PDF file attempts to exploit a Adobe Flash Player vulnerability, and if it succeeds, it drops a malicious version of the svchost.exe file into the computer. The PDF also opens itself so that the targets don’t become suspicious.

The executable then drops a malicious version of the ntshrui.dll file into the Windows directory, and makes explorer.exe run it.

It all ends with the victims having a permanent backdoor opened on their computer, and it contacts its C&C server (from which it gets further updates), enumerates disk drives, steals system information and forwards it all to the C&C server. Judging by this, this espionage campaign is currently in the reconnaissance phase.

“Organizations should ensure proper email security is in place and also make patch management a priority, as the vulnerability exploited here was patched in 2011,” the researchers point out.