At RSA Conference 2013 in San Francisco, Radware announced DefensePipe, an integrated and comprehensive solution to help mitigate volumetric DDoS attacks which threaten to saturate a customer’s Internet pipe, or the “outside line” that connects enterprises to the web. 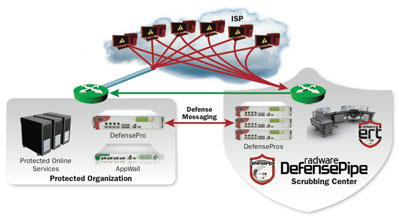 DefensePipe is a solution for end to end attack mitigation on-premise and in the cloud. Available to Radware customers that currently deploy an on-premise Attack Mitigation System (AMS), it is a scalable solution that automatically engages once the customer’s AMS detects that pipe saturation is imminent.

The sharing of behavioral base line data between the on-premise AMS and DefensePipe, that includes a real-time signature created by the AMS, enables DefensePipe to start mitigation in the cloud much faster and with greater accuracy.

The organization’s suspicious Internet traffic is immediately diverted to the DefensePipe cloud based scrubbing center where it is distanced further from the protected network and its scalable resources can mitigate high volume attacks. Once the traffic is “cleaned” it is then sent to the organization and regular operations continue once the attack has ceased.

“We’ve essentially extended the strength of our AMS to the cloud with this robust end to end solution that provides greater flexibility to protect against any type and size of threat – all under the hood of the same attack mitigation system,” says Avi Chesla, chief technology officer, Radware.

Also included is access to Radware’s Emergency Response Team (ERT), a “round the clock” staff of security experts who are knowledgeable and experienced with emerging cyber threats, their detection and mitigation. Whether the attack needs to be mitigated on-premise or in the Cloud, Radware’s Emergency Response Team mitigates the attack with the customer during the entire attack campaign. Customers will not need to work with multiple vendors or services during an attack and can benefit from the peace of mind of having a single contact point during an attack.