Once connected to the attacked PC, cyber-criminals launch a variant of the ArchiveLock Trojan, which uses the archiver WinRAR to encrypt files.

“Trojan.ArchiveLock.20 creates a list of files to be encrypted, empties the Recycle Bin, and deletes all backups stored on the computer. The Trojan uses the console version of WinRAR to place files on the compiled list into password-protected, self-extracting archives and employs a special utility to delete original files, after which they simply can’t be restored,” Dr. Web researchers explain.

Then the Trojan presents the victim with a long message, explaining the situation and asking $5,000 for the password that would decrypt the archives (click on the screenshot to enlarge it): 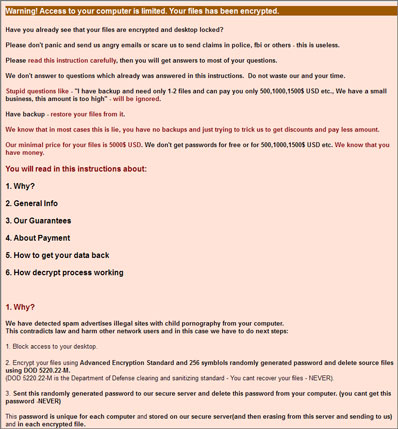 “A significant number of systems have now been compromised by the Trojan in Spain and France: over the past 48 hours, Doctor Web’s technical support has gotten dozens of requests from people whose files have been encrypted by Trojan.ArchiveLock.20, and such requests are still being received,” they say.

They also advised users not to believe what the message says, not to delete any files from the hard disk or try to reinstall the operating system, but to contact the company by submitting a ticket in the Request for Curing category, and promising free-of-charge help in decrypting the files.