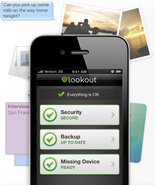 One of the recent issues of Forbes magazine featured a three-page story on Lookout Inc., the company that, according to the article, has been able to trounce multibillion-dollar security giants like McAfee and Symantec.

With their free application for several types of mobile devices, they managed to attract more than 30 million users. Even if you, like me, don’t equate the number of downloads with the number of users, it can’t be denied that the company is on fire.

One of my colleagues has been using Lookout on his Android device for a while now, and he is very satisfied with the app. The feedback for Lookout on Google Play is impressive – it has 4.5/5 rating with more than 400,000 votes.

As a result of all the positive stuff I have read about the product, I downloaded the iPhone version (the review is based on v2.8, uploaded March 27th, 2013) to see whether the hype is justified.

The installation is straightforward and before starting the app, you’ll need to setup an account on Lookout.com. Through this user interface, you will be able to do some risk management in case you lose or misplace your device.

The app itself provides a couple of local security features:

System Advisor – a system check where you can see if your iOS is up to date and that it isn’t jailbroken.

Location Services – A two-screen mini guide showing users the need for turning off location services for apps that really don’t need to use this feature.

Process Monitor: Lookout checks all the running apps for malicious processes. There’s not much (if any) information online on how this works.

While these are all good features, the Lookout application is most renowned for its ability to get in touch with your device in case you lose it or it gets stolen.

The functionality is practically the same as the iPhone’s built-in module of the same kind. You click on the Locate button on your Lookout.com interface and wait for it to pinpoint the device’s location on Google map. When the device is located, the owner will get an automatic email with a screenshot of the actual location, as well as precise GPS coordinates. 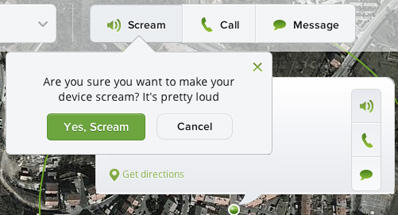 You have the option of sounding an alarm on your device. The alarm will be active for 60 seconds and will be quite loud even if your iPhone audio settings are set on low or “silent”. After four alerts, the person in possession of the device can manually turn the volume down.

Adobe Flash is needed for this functionality, as the Lookout.com interface uses it for setting up a two way VoIP connection. In theory, you call your device from your browser and you can talk to the person who found / stole it. Maybe it’s just me, but I think that if I lose my device it would be much easier and simple to borrow another phone and call it, rather than going to a computer, connecting to the lookout.com web site and do it from there. 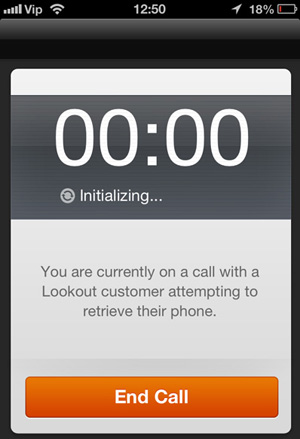 When you call the device from the web interface, the iPhone won’t ring as it normally does – a push message will be shown on the top of the screen. This message is shown only for 4-5 seconds, so unless the person reacts quickly, she isn’t able to answer the phone. Calling the device from another phone once again seems like a much better idea. This internal call back feature works only if the device is connected to the Internet, and the person in possession of the device can answer it only if no login PIN is set up on the device. A regular phone call bypasses this limitation.

Send a message to your lost device

Once again, you can go online and use the web interface to get in touch with your missing device. But, there’s another way to do it. In the previous step you could call the device directly, but here you can send a custom short message with a phone number that will be automatically called (via built-in VoIP) from the device. The quality of the Lookout VoIP service is solid, but from my extensive testing, this option doesn’t work in all countries. Calling US numbers worked just fine, but there were problems with some European country codes. 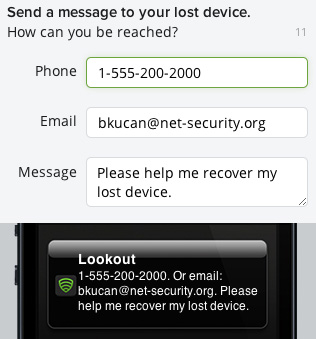 Besides the security settings and location services, Lookout also offers the possibility of performing automatic backups of your contact lists. The contacts will be backed up online on a daily basis and you will be able to easily restore them as well as migrate them to your other devices. Lookout is automatically set to backup daily, but allegedly you can customize the frequency on the “Settings” page in the Lookout mobile app. Unfortunately, this is no longer the case – at least not for the iPhone application. A month ago you could chose to perform a manual backup, but now you’re stuck with the daily ones.

I also came across a bug in the backup process. If you delete all the contacts from the online backup (not the device of course), you won’t be able to back them up online again. If you add a new contact on your iPhone, it will be uploaded within the next 24 hours, but I couldn’t find a way of getting the whole contact list backed up again.

Two weeks before testing the 2.8 version of the iPhone application, I spent a couple of days with 2.7 (built in January 2013) and the old web interface that was evidently changed. Back then, Lookout was completely useless – the service didn’t work at all. It had a number of bugs and practically none of its functions were working correctly. With this upgrade, the look and feel of the iPhone application has changed little, but the web interface has been immensely improved and the main features now actually work.

I believe that Lookut’s flagship Android product is what garnered them millions of users and profiles in Forbes and other magazines. The iPhone is a less open environment than Android and I understand the limitations of implementing interesting security features. Lookout for iPhone feels like something the company felt they must do, but actually serves no good purpose.