Swiss-based U.K. firm Redact has launched a new app which, they claim, offers a completely secure way of exchanging encrypted messages from iPhone to iPhone and even the possibility of deleting a sent message from the recipient’s device. 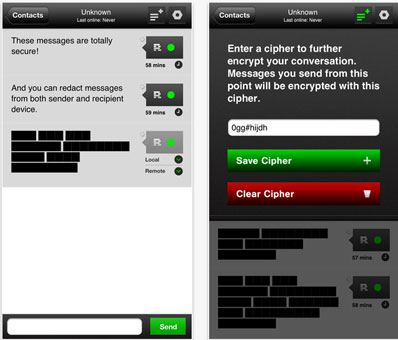 And in order to prove their faith in their technology, the company has also issued a challenge to anyone who believes they can intercept and decrypt a challenge message. The prize for the winner is £10,000 (over $15,000).

“Using encryption, ciphers and peer to peer messaging, Redact sends heavily encrypted messages from one phone to another without passing through any central servers. Messages you have sent or received can be redacted from both handsets at the touch of a button with no method of recovery,” says the company on its website, adding that the recipient of the message cannot avoid or refuse a redaction.

“Redact never asks for a username, email or phone number, you’re automatically assigned a PIN,” they also explained. “Your unique number is never stored anywhere, and there is no recovery tool for hackers to exploit. Only you can change your alias, so you can be certain contacts aren’t using your real name anywhere in the application.”

The sent and received messages are not stored by the company, and neither is contact information or usernames, making it impossible for attackers to steal any of this information, and governments to subpoena the company for it, they claim.

There is a distinct lack of details on how the technology works, which is understandable given the aforementioned open challenge.

According to The Independent, the company has submitted the app (Redact Secure Messenger) and the technology to the U.K.’s Communications Electronic Security Group (CESG) and is searching for government approval. In the meantime, they offered the app for free to MPs and FTSE 500 CEOs.

Other iPhone users can download the app from Apple’s App Store for £3.99 ($5.99), and the Android, Windows Phone 8 and desktop versions are “coming soon.”