The German Anti-Botnet Advisory Centre is warning (in German) users about a new ransomware / BKA Trojan variant that accuses users of being involved in the reproduction of pornographic material involving minors (click on the screenshot to enlarge it): 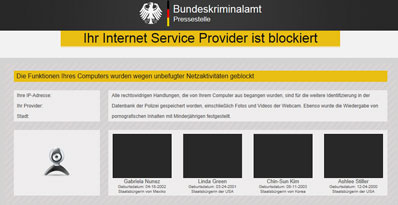 The message, purportedly coming from the Federal Criminal Police, includes for photos of children along with their name, date of birth and nationality, and claims that these photos have been found on the victims’ computer, then asks them to pay a fine to make the charges go away and to unblock the machine.

The interesting thing is that the photos are actually on the computer, but they are there because the malware put them there.

The criminals instruct users to pay a fine of 100 Euros via Ukash or paysafecard, but they should do no such thing. The Anti-Botnet Advisory Centre advises them to use the free HitmanPro tool that apparently removes both the malware and the offending images.