Ipanema Technologies and Easynet Global Services unveiled the results of Killer Apps 2013, a major study into the performance of networked applications. 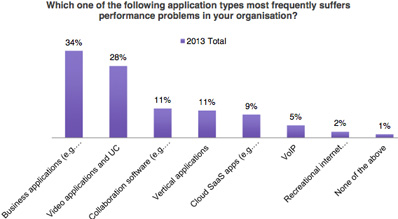 Networking budgets are back on the rise: after modest investment in corporate networks during 2012, this year’s research shows organizations are prioritizing far higher levels of investment, with budgets increasing for 52% of organizations.

Thierry Grenot, Executive Vice-President at Ipanema Technologies added: “What’s particularly concerning about this years’ study is that increased networking budgets are not translating into a reduction of application performance problems. Not only do we see application performance problems increasing, but those problems are affecting critical applications like ERP systems and increasingly, sophisticated Unified Communications products. This type of problem has a significant impact on productivity and can jeopardise a wide range of strategic IT programmes such as moving to the cloud.”

He continued: “If organizations are investing in business productivity systems they should be addressing any performance challenges head on. Companies need the ability to pro-actively monitor and to allocate network resources to the applications that really need them in order to control this situation effectively.”

Justin Fielder, CTO at Easynet commented: “What’s clear from this year’s KillerApps research is that traditional approaches to network management are no longer enough. We see companies throwing more money at the network and increasing bandwidth capacity, yet in just one year 10% more organisations are telling us that application performance problems are becoming more frequent.”

He continued: “It’s time for our industry to realise that the rise of cloud computing and evermore sophisticated applications mean many organisations are heading for “application anarchy’, where IT departments lose control of how systems use the network and as a result, the performance of those individual applications.”