A Veeam survey of 500 SMBs across the USA and Europe found that they are experiencing significant issues with the cost, complexity and lack of capabilities of their data protection for virtual environments. 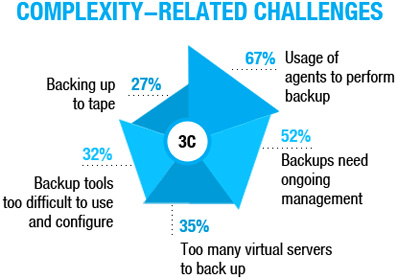 In particular, 85% of SMBs are experiencing cost-related challenges with backup and recovery, 83% with lack of capabilities and 80% with complexity. This means there is a maximum of 15% of SMBs that currently have no issues with data protection.

Other key findings were:

“More and more, SMBs are being subjected to the same IT challenges and business pressures as large enterprises,” said Ratmir Timashev, President and CEO of Veeam. “As such, any disruption to their IT infrastructure can have severe consequences. This is why it’s particularly worrying that the vast majority of SMBs reported cost, complexity and capability challenges with backup and recovery. When you also consider that 1 in 6 recoveries simply don’t work, it’s clear that the issue of data protection is a ticking time bomb in the SMB community.”

85% of SMBs identified cost-related challenges with their backup and recovery of virtual environments, including: high ongoing management costs (51%), expensive licensing models (48%) and backups either requiring or using too much storage (44%).

83% reported capability-based challenges, including: backups taking too long (40%), recovery taking too long (34%, suggesting that the majority are happy with 4 hours’ recovery time), difficulty recovering virtual servers (25%) and file- and application-level recovery being too difficult (22%).

Lastly, 80% of SMBs are facing complexity-related challenges with their data protection, including: backups needing ongoing management (52%), too many virtual servers to backup (35%) and backup tools being difficult to configure and use (32%).

At the same time, SMBs are looking to solve these issues. 55% are planning to change their backup tool for virtual serves in this period, with the average time to change being only 10 months. The reasons given to replace their current tools include Total Cost of Ownership (46%), complexity (44%), and lack of capabilities such as failure to meet Recovery Time Objectives (30%) and Recovery Point Objectives (21%). This is in tandem with a growth in virtualization.

While they currently form 52% of the IT infrastructure, virtual servers are expected to form 63% within 2 years. This may also increase the amount of servers that are protected. Currently, 67% of the virtual environment is backed-up, meaning that almost a third of SMBs’ virtual infrastructure is unprotected.