Here’s a taste of some presentations you can expect at HITBSecConf Malaysia in October. You can register here. 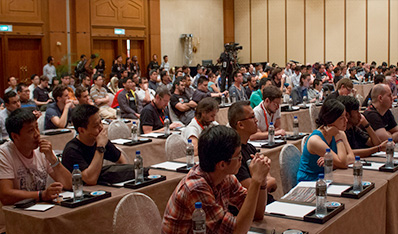 In recent years, automated identification systems (AISes) have been introduced to enhance vessels tracking and provide extra safety to marine traffic, on top of conventional radar installations. AIS, which is currently a mandatory installation for all passenger ships and ships over 300 metric tonnes, works by acquiring GPS coordinates and exchanging vessel’s position, course and information with nearby ships, offshore installation, i.e. harbors and traffic controls, and Internet tracking and visualizing providers.

In this talk, we share with you our finding, i.e how we have able to hijack and perform man-in-the-middle attacks on existing vessels, take over AIS communications, tamper with the major online tracking providers and eventually fake our own yacht!.

Are you interested to learn about the delicate hacks and tricks that go on behind the curtains of the scene better known as “the console hacking scene”? Are you eager to find out who/what is behind all this incredible work that allows your little Nephew to play a copy of Call of Duty on his XBOX? Then this talk is for you!

In this secure BIOS update scheme, there are two primary attack surfaces that can be targeted in an attempt to break the signed BIOS requirement: the Intel architecture protection mechanisms, and the vendor’s implementation of the signature enforcement and update routine.

This presentation demonstrates two attacks; one against each of these targets. Both of these attacks allow an attacker to arbitrarily re-flash the BIOS on a number of systems despite the presence of signed BIOS enforcement.