However hard Google works to prevent malicious apps from being offered on Google Play, its official online Android market, some always get through. 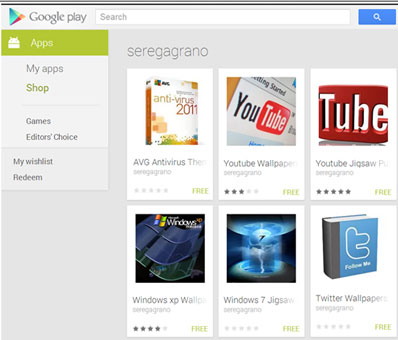 In this latest case they discovered, the developer has misused Windows’, Twitter’s, YouTube’s and AVG’s names to offer apparently harmless wallpaper and puzzle apps that are usually used to trick users into signing up for pricy services or to deliver a constant stream of ads.

They also discovered a bogus “avg antivirus pro” app by another developer, possibly riding on the coattails of the recent launch of the latest version of their AV solution.

“When you install one of these fake applications, it requests the user to change configurations related to the search options. After the user accepts the conditions, commercials for adult services are shown,” they explain. “Later, the app itself offers none of the functionality advertised (such as antivirus protection).”

Those particular developers have already been booted out of Google Play and those apps made unavailable, but new, similar ones are sure to pop up very soon.

Users who want to prevent themselves from falling for such schemes must always remember to check the name of the app developer. If it’s not the same as that of the company that creates the product, it’s a fake and probably malicious.