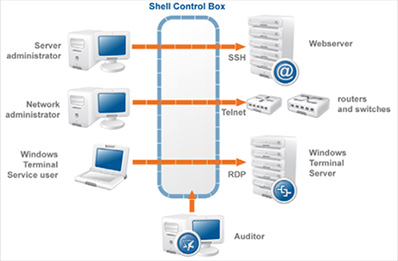 SCB 3 F5 is an independent and transparent device that does not require any change to the network or privileged users’ everyday work, and can now be integrated with all popular password management system.

Improved prevention of malicious actions: Real-time alerting in graphical sessions
SCB 3 F5 extends the previous version’s capabilities – monitoring, alerting and blocking the content in SSH traffic – to RDP and VNC protocols, as well. Now SCB can monitor the traffic of these graphical connections in real time, and send an e-mail alert and/or terminate the connection if a user tries to run an unwanted application.

Improved audit of privileged web activities: Review of HTTP pages
SCB can now render visited webpages like a web browser. Screenshots tracking the monitored user’s actions can be downloaded, in which. When replaying the HTTP session, the audit trail can be used as a web-browser to navigate among user-visited pages; to display the web pages by scrolling its content, and to click on the links; and even to display the forms with the values that were filled in by the user.

Monitor access to legacy network devices: New Telnet features
SCB 3 F5 offers several new features to reliably control and audit Telnet connections even if they are SSL/TLS-encrypted. For example, SCB can be configured to require gateway authentication from network operators in Telnet connections. SCB’s credential store can store user credentials and use them to login to the target device, without the user having access to the credentials. SCB can also monitor the Telnet traffic in real-time, and can send an alert or block the connection if a suspicious command or text appears in the command line or on the screen.