Modern living is defined by pop culture phenomena. In the last few months alone, 4G rollouts, the release of smart watches and launch of long-awaited video games have all generated huge publicity and attention with legions of adoring fans lining up outside stores to get a hold of the latest “must-have’. But besides these visual clues, how else can we measure the success of a product launch? If online, we’re not going to see crowds rushing into stores, so the equivalent is to measure network bandwidth traffic.

Recently, we saw the release of Apple’s iOS 7 software for the iPhone. Arbor Network’s Security Engineering and Response Team (ASERT) noticed that Apple released the update almost as fast as the popular websites that track Apple activity. ASERT saw this unveil online by way of increased network traffic destined for Apple’s Akamai infrastructure.

Let’s look at traffic for the past few weeks for Akamai, to see these observations in action. Notice that on Thursday, September 19th at around noon GMT there is a sudden spike in traffic, reaching upward of five terabits per second (5Tb/s), where normally such traffic is peaking near three terabits per second (3Tb/s). With Apple being an Akamai customer we can correlate this spike to Apple’s release times of iOS. The graph below shows traffic for Akamai in the North American region. 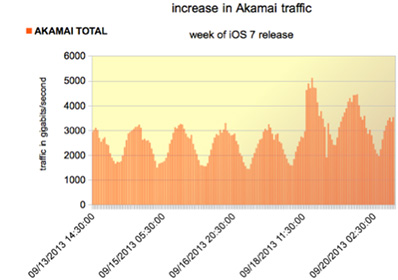 Apple is not the only company making splashes in the Internet sea. Blizzard, the company behind the World of Warcraft (WoW) online game, released an anticipated patch to its customer base on September 10th in North America, and players in the European Union were able to update their environments closer to September 11th, where we see an additional increase. The following graph shows Blizzard’s TCP port that WoW would use for much of its communication in North America. 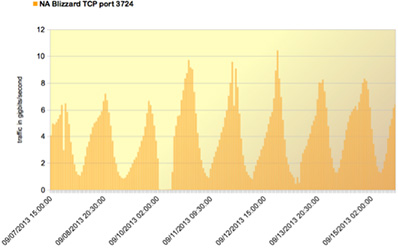 We can also see from the graph, the traffic was nearly absent shortly before the launch of the update both in the US and EU, where Blizzard announced maintenance windows. What Arbor finds surprising is that total web traffic in the EU increased significantly shortly after the release of the patch. The graph below shows the internet traffic for the EU on a normal day, looking specifically at the EU’s port 80, which refers to the World Wide Web in this region (WWW). 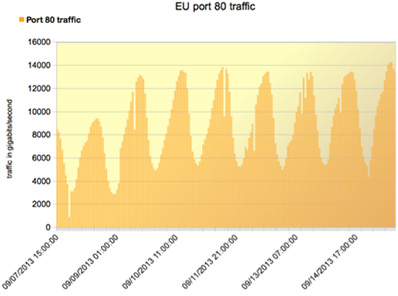 These events over the last two weeks demonstrate the relationship between consumer behaviour and technology with its influence on internet traffic. It’s also interesting to observe from a business perspective how best to handle the capacity and scale to address this behaviour. I’m sure the record stores and ticket booths of yesteryear could learn a few things from these providers.