Mark Jeftovic, the CEO of Toronto-based domain registrar and managed DNS provider EasyDNS, has published a (second) letter his company received from UK’s Police Intellectual Property Crime Unit asking them to suspend access to a domain that is allegedly “making illicit financial gains for the criminals operating it.”

After pointing out that the website in question is a BitTorrent search engine that seemingly doesn’t host any torrent files, he shared the instructions given by the aforementioned police unit: freeze the whois record for the domain, and redirect the DNS for it to another specific domain hosting this notice (with links): 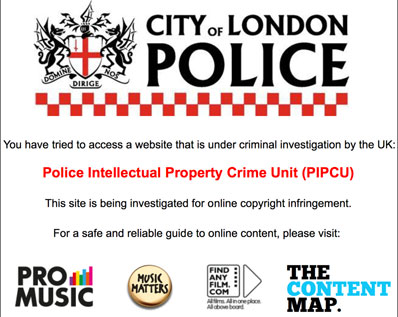 If EasyDNS refuses to do so, the police reserves the right to refer the matter to ICANN, the letter said, and insinuated that EasyDNS could lose its accreditation with ICANN.

But Jeftovic, whose company somewhat curiously became the DNS provider for WikiLeaks’s sites in 2010 after another one refused them further service because of DDoS attacks that crippled their web servers, said he will have none of it.

“Who decides what is illegal? What makes somebody a criminal? Given that the subtext of the request contains a threat to refer the matter to ICANN if we don’t play along, this is a non-trivial question,” he wrote in a blog post.

“Correct me if I’m wrong, but I always thought it was something that gets decided in a court of law, as opposed to “some guy on the internet” sending emails. While that’s plenty reason enough for some registrars to take down domain names, it doesn’t fly here.”

“We have an obligation to our customers and we are bound by our Registrar Accreditation Agreements not to make arbitrary changes to our customers settings without a valid FOA (Form of Authorization). To supersede that we need a legal basis. To get a legal basis something has to happen in court,” he pointed out, and added that they haven’t taken down the domain, and that they responded to the police by saying they should get a court order.