Research by ISACA shows that, of 1,000 employed consumers surveyed in the UK, only 4% named the makers of their mobile phone apps as the entity they most trust with their personal data. Yet, 90% don’t always read privacy policies before downloading apps to their devices.

This apparent gap between belief and behavior is likely to matter even more in the future, as consumers use mobile apps to interface with everyday objects that increasingly share data via the Internet. 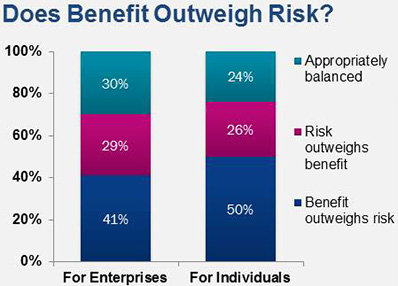 ISACA’s IT Risk/Reward Barometer examines the risks and rewards of key trends, including the Internet of Things, Big Data and BYOD. The Barometer consists of two components:

“As organisations embrace technologies whose success depends on collecting and sharing data, they need to proceed with the consumer at the forefront of their decisions. Clearly, consumers have mixed feelings about how connected devices are sharing information, so businesses need to establish policies and communicate them openly to preserve trust in information,” said RamsÃ©s Gallego, international vice president of ISACA and security strategist and evangelist at Dell Software.

“The rapid increase in connectivity, via the Internet of Things, is fundamentally changing the way we live, work, play and behave. What this survey clearly shows is the shift in perception about risk and privacy as the world becomes increasingly connected,” said Gallego.

“Consumers need to understand the personal implications of allowing applications to access our personal data on mobile devices. We need to check the terms and conditions, not only for what they allow in the present, but also for what our permissions might grant them the ability to do in the future. There are many benefits to using apps, but we need to ask ourselves what level of risk we are willing to accept for the benefits they provide,” he added.