New research highlights an increasing optimism in the technology spending landscape. Nearly 900 IT leaders (CIOs, IT VPs, IT directors, IT hiring managers) were polled by TEKsystems in September 2013 on the current state of IT spending, skills needs and workforce issues as well as expectations for 2014. 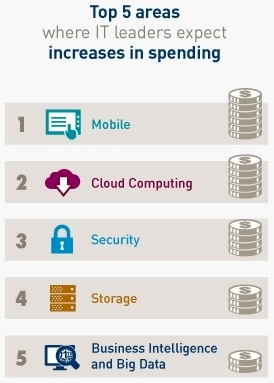 Confidence in spending increases and ability to meet demands are high:

Success hinges on core skills and leaders are prepared to pay:

Salaries on the rise, hiring increasing at similar rates across employment models:

“In comparison to last year, IT leaders have significantly shifted their outlooks to be positive overall in IT budget allocations as well as their expectations for hiring and salary increases,” says TEKsystems Research Manager Jason Hayman. “Most interesting is that there seems to be greater demand for the core skill sets of programming and application development and software engineering. IT leaders indicate exceptional talent has become harder to find in these areas and have adjusted their salary strategies accordingly.”