Tripwire has analyzed the security provided by the most popular wireless routers used in many small and home offices and found that 80 percent of Amazon’s top 25 best-selling SOHO wireless router models have security vulnerabilities. 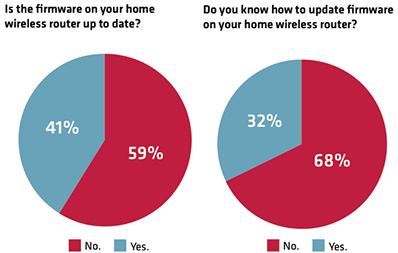 Of these vulnerable models, 34 percent have publicly documented exploits that make it relatively simple for attackers to craft either highly targeted attacks or general attacks targeting every vulnerable system they can find.

Routers are an ideal target for cyberattackers because they can be used to eavesdrop on traffic sent to and from nearby enterprise access points. After an attacker has gained control of a router, they are able to monitor, redirect, block or otherwise tamper with a wide range of online activities. Once a router is compromised, devices guarded by the router’s firewall become targets for additional network-based attacks.

Even technically oriented users find it difficult to identify a wireless router cyberattack because router user interfaces are minimal, and the traffic sent from a compromised device to cyberattackers is typically invisible.

“VERT’s research and SANS recent discovery of The Moon worm currently infecting exposed Linksys routers indicates that threats to routers will continue to increase as malicious actors recognize how much information can be gained by attacking these devices,” said Craig Young, security researcher for Tripwire.

“Unfortunately, users don’t change the default administrator passwords or the default IPs in these devices and this behaviour, along with the prevalence of authentication bypass vulnerabilities, opens the door for widespread attacks through malicious web sites, browser plugins, and smartphone applications,” Young added.