Your mobile device knows everything about you. But how well do you know your mobile device? Beginning today, savvy consumers can truly take control of their personal information on their devices – by installing viaProtect from viaForensics.

Unlike traditional mobile security apps, which utilize a database of known malicious apps to screen for viruses and malware, viaProtect monitors all apps for mobile risks. For instance, viaProtect can detect if an app handles your personal data insecurely by transmitting it unencrypted or to servers located overseas. viaForensics estimates that as many as 75 percent of apps are “leaky”, or insecure. 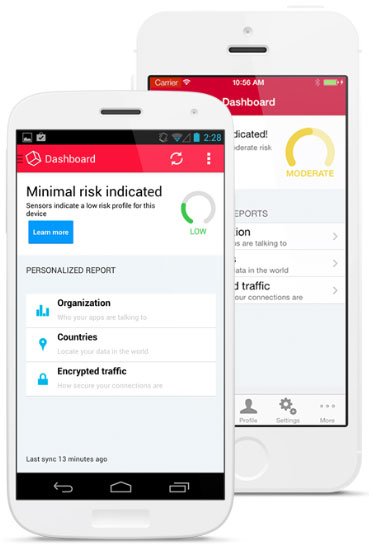 While malware and computer viruses are the primary threats for the PCs, leaky and insecure apps are the true risks to personal data on mobile devices. These apps transmit information in various risky manners – e.g. without encryption or to overseas servers which allows data to be intercepted by unwanted parties. The harsh consequences can include identity theft, financial theft and loss of privacy.

viaProtect gathers mobile forensic, system, network, security and sensor data from devices, then utilizes statistical analysis and risk indicators to detect suspicious events or behavior. This means that an app can be monitored in real-time to predict potential risks or problems- rather than just checking for known malicious apps. viaProtect uses real time analytics to detect behavior that is suspicious or potentially risky.

In addition, a browser-based dashboard lets multiple devices be monitored from a single account – perfect for families.

viaProtect was also built from the ground up to support both iOS and Android platforms. Since iOS is less vulnerable to virus attacks, it has historically been under-served by mobile security solutions. However, leaky apps are just as common on iOS as Android, making viaProtect an essential tool for either platform.

The app, which will be showcased at North Hall booth #2627 at RSA Conference 2014, is free of charge for personal use. A public preview can be downloaded from Apple’s App Store or Android’s Google Play Store.