Mobile apps in North America send 8.5 times more invitations per application in the last six months, in a race to gain new users.

As part of a new report, AdaptiveMobile has identified the top social, gaming and messaging applications, including Glide, Meow and Tango, that are using an aggressive form of Growth Hacking that makes it difficult for users to opt-out of sending invitations to their contact lists. 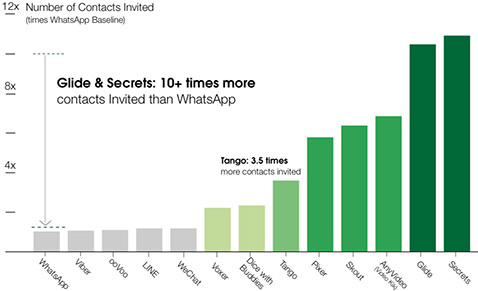 Growth Hacking is a method of increasing the user base of an app, which occurs when a user-installed app requests to promote itself by notifying or inviting the user’s contact list by SMS. AdaptiveMobile started tracking the trend and its associated “App-Spam” earlier this year.

The issue has become a mainstream problem with Google recently updating the Google Play terms and conditions to include a note that apps must not be involved in “Unsolicited promotion via SMS services.” Apps now have 15 days to comply with this update to regulations.

“It’s common to invite friends to new apps, but this shouldn’t turn into spam,” said Cathal Mc Daid, Head of Data Intelligence & Analytics at AdaptiveMobile. “These apps take this principle above and beyond acceptable limits, subverting communications between friends and contacts.”

As part of its investigation, the Data Intelligence & Analytics team at AdaptiveMobile monitored the most active, popular social and messaging applications in North America between February and March 2014, noting which ones were the most frequent and aggressive in exploiting existing contacts for new memberships through sending App-Spam, and which apps were receiving the most complaints. AdaptiveMobile found the following to be the most aggressive in sending SMS messages to a user’s contact list, while also making it difficult for users to opt-out:

In monitoring the invitations sent during this period, AdaptiveMobile found that Glide sent 57% of the invites, and Tango sent 19.7%. In order of comparison, Glide sent out over 10 times more SMS invites than WhatsApp, an application with low levels of customer complaints, and made it very difficult for users to opt-out of inviting their contact list, leading to the highest number of consumer complaints.

Although the Tango app allows users to easily opt-out of inviting contacts when they install the app, it also includes an “Invite on Activity’ feature, so when a photo is taken using the app, this leads to more invites being sent, resulting in a significant number of complaints.

“The key to whether an SMS invite is welcome or viewed as spam lies in the application’s user interface,” said Mc Daid. “Making it difficult for users to not send SMS spam invites is one reason behind the high level of App-Spam. This will hurt a company in the long run not only by irritating consumers but, as we’ve seen with last week’s Google announcement, it could also result in having an app being removed from an app store for not complying with terms and conditions.”

AdaptiveMobile has drafted a set of recommendations to ensure that application developers that wish to send invites do it in a manner that won’t lead to messaging abuse and complaints including:

“If an App chooses to send invites, and if this is permitted by the relevant App store and Mobile Operator, then it needs to make sure that safeguards are built into the design to ensure that a user can easily opt-out,” said Mc Daid. “While compiling the report, we alerted all the applications identified as generating excessive invites in our report and shared the research with Google and other industry players. We will continue to work closely with apps developers, app store owners and mobile operators to reduce the amount of App-Spam being generated.”