Malware peddlers have been spotted impersonating popular coffeehouse chain Starbucks in order to trick users into downloading a rootkit-equipped variant of the Zeus banking Trojan.

The attack starts with an email made to look like it was sent by the company: 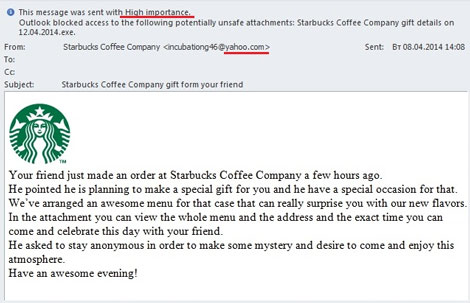 The criminals have used several tricks to make the potential victims believe the email is genuine and important enough to be perused immediately and the attachment downloaded and run: they included the company logo, the message was sent with the “High importance” option checked, they have offered something for free (a gift from an anonymous friend).

Still, they also made several mistakes, and discerning users will spot that the emails have not been sent from a legitimate-looking email address (Gmail and Yahoo mail accounts have been used in this particular case) and the attached “menu” is actually an executable instead of a PDF or text file.

“The cybercriminals made no effort to mask it with an archive or double filename extension. They seemed to be sure a happy recipient would open the attachment without any suspicion,” Kaspersky Lab researchers noted.

The malware in question – a Zeus variant – is able to istall the Necurs rootkit on the target machine, which then prevents security software functioning as it should.