A curious like-harvesting scam is doing rounds on Facebook, threatening users with account deactivation if they don’t go through the steps defined in scammy status updates: 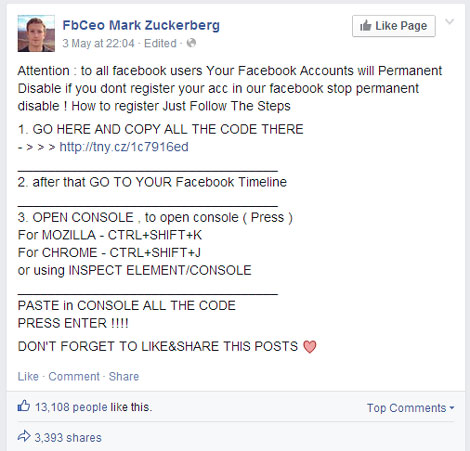 The updates are posted by fake accounts impersonating, among others, Facebook founder and CEO Mark Zuckerberg.

Malwarebytes’ Jovi Umawing first got wind of the scam when she received several legitimate Facebook notifications informing her that she and some of her friends were tagged in spammy posts urging them to “activate” their accounts.

“The source post originated from an obviously fake profile called Facebook Announcement 2K14, which was created as a community page some time last month,” she noted. The aforementioned fake Zuckerberg account has also been created very recently.

The code that the scammers want the users to paste in their console makes their account automatically like certain accounts as well as the scammer’s and prevent them from unfollowing them; auto-follow certain lists from those accounts; auto-like spammy posts; tag random friends in their network to a post that is posted as a reply to the original spammy post; and change the look of the victims’ account.

So far, it seems that mostly users based in the Philippines are targeted, but the scam can easily spread. Users are advised to be wary of this and similar scams, and to report them as such to Facebook every time they encounter one.