BitSight analyzed Security Ratings for S&P 500 companies in four industries – finance, utilities, retail and healthcare and pharmaceuticals. The objective was to uncover quantifiable differences in security performance across industries from April 2013 through March 2014. 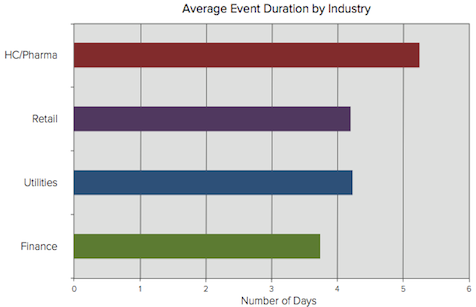 The study revealed that the healthcare and pharmaceuticals sector has many of the same characteristics as the retail sector, including a high volume of security incidents and slow response times, and that both of these sectors lag behind the finance and utilities sectors in security performance.

BitSight uses publicly available data to rate companies’ security performance on a daily basis. Observed security events and configurations, such as communication with a botnet, malware distribution, and email server configuration, are assessed for severity, frequency and duration and used to generate objective Security Ratings. BitSight Security Ratings range from 250 to 900, with higher ratings equating to higher security performance. Industry ratings are calculated using a simple average of the Security Ratings of companies in that sector.