The manipulation of legitimate mobile apps and services played a key role in the expansion of mobile malware at the beginning of 2014. 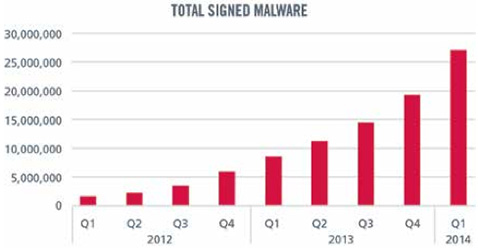 McAfee Labs found that 79 percent of sampled clones of the Flappy Birds game contained malware. Through these clones, perpetrators were able to make phone calls without user permission, install additional apps, extract contact list data, track geo-location and establish root access for uninhibited control over anything on the device, including the recording, sending, and receiving of SMS messages.

Beyond app reputation, McAfee Labs saw notable examples of mobile malware that take advantage of the features of trusted apps and services, including:

Android/Waller.A: This Trojan exploits a flaw in a legitimate digital wallet service to commandeer its money-transfer protocol and transfer money to the attacker’s servers.

Android/Balloonpopper.A: This Trojan exploits an encryption method weakness in the popular messaging app WhatsApp, allowing attackers to intercept and share conversations and photos without users’ permission.

“We tend to trust the names we know on the internet and risk compromising our safety if it means gaining what we most desire,” said Vincent Weafer, senior vice president for McAfee Labs. “The year 2014 has already given us ample evidence that mobile malware developers are playing on these inclinations to manipulate the familiar, legitimate features in the mobile apps and services we recognize and trust. Developers must become more vigilant with the controls they build into these apps, and users must be more mindful of what permissions they grant.”

Each quarter, the McAfee Labs team of 450 multidisciplinary researchers in 30 countries follows the complete range of threats in real time, identifying application vulnerabilities, analyzing and correlating risks, and enabling instant remediation to protect enterprises and the public.

Signed malware: New malicious signed binaries remain a popular form of attack, increasing by 46 percent in the first quarter of 2014.