GFI Software announced the findings of its second independent study into email user habits, which revealed a stark increase in the way that work email is encroaching into the personal lives and downtime of staff. Of those surveyed, some 41% admit to checking work email at least once a day in their personal time, while 38% admit checking multiple times a day or in real-time through pre-work mornings, evenings, weekends and days off. 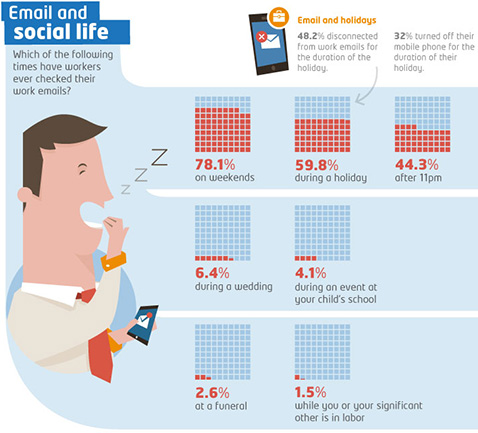 Building on the inaugural 2013 study, this year’s research into how employees interact with email expanded its focus to look at the impact of mobility and BYOD on email consumption. The survey found that 18% of those surveyed now use a smartphone or tablet as their primary device for sending and receiving email, thus ensuring that staff are wired into work email 24 hours a day, seven days a week unless they turn the device off.

The blind, independent study was conducted for GFI Software by Opinion Matters, surveying 500 UK workers from companies with up to 500 employees.

The survey revealed a substantial encroachment of work email not only into personal time, but also into social events and other milestone non-work occasions. For example:

“Email is not just a critical business communications tool, but as the data shows it is relied on – perhaps too much – as a virtual filing cabinet and storage repository,” said Sergio Galindo, general manager of the Infrastructure Business Unit at GFI Software. “This kind of approach can all too easily breed an “out-of-sight, out-of-mind’ attitude towards email safety, security and backup, which is dangerous ground for any company to be on given the value of the data tied up in an organization’s mailboxes and the disruption that is caused when just one user suffers email disruption, let alone the whole company.”

The research data revealed that 61% use their email mailbox as a storage tool to file and retrieve documents, a potentially dangerous and ineffective way to manage email that creates over-size mailboxes that in turn become prone to data corruption, slow email performance and high server-side storage costs.

“The plus side is that despite the substantial encroachment of email into people’s personal lives, people continue to view email positively, with 85% of those surveyed considering email to be a blessing rather than a curse, which is a great endorsement of the technology and the way it is has transformed both business and personal communications,” Galindo added.

Ubiquitous availability of cheap smartphones, tablets and mobile connectivity has undoubtedly helped blur the boundaries between work and personal time. The survey data showed that 16% of respondents were using smartphones as their primary email device, with only 2% using tablets. With the cost of basic tablets already as low as £40, this is a surprising statistic.

The surge in mobile device use has made casual work email use harder to resist, with 33% using their mobile device to check email on holiday, while 23% have risked company email security by connecting their device to public Wi-Fi hotspots while away. Only a third (32%) turn off their smartphone while on holiday, although 48% claim they disable or otherwise disconnect work email from their phone for the duration of their time off.

The research also revealed that conventional desktop PCs continue to be the main device people use for dealing with email (54.6%) while laptops are a surprisingly distant second, used by 26.4% of respondents as their primary email device.