A new study found that nearly half of respondents agreed that users bringing downloaded apps or content with embedded security exploits into their organization, as well as malware infections, are top BYOD security concerns. In addition, 60 percent of respondents said that malware protection is a requirement for mobile security. 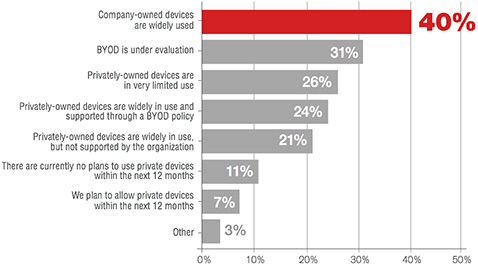 The study was independently conducted by the Information Security Community on LinkedIn. This second edition study collected responses from more than 1,100 IT security practitioners to gain a deeper understanding into the practices, usage and security concerns around BYOD.

“Loss of company or client data, followed by unauthorized access to company data and systems are well publicized as security threats around BYOD, and they were respondents’ biggest security concerns in our 2014 study,” said Holger Schulze, founder of the 200,000+ member Information Security Community. “But it is very interesting that the study revealed that respondents’ next biggest security concerns were users bringing downloaded apps or content with embedded security exploits into their organization (47 percent), followed by malware infections (45 percent).”

When it comes to sensitive data and intellectual property being accessed over BYOD, respondents were most concerned with protecting business data (74 percent), customer/employee data (69 percent), and documents (66 percent).