BitTorrent, the company that develops the eponymous peer-to-peer protocol and two popular clients that use it, has announced the release of Bleep, an online communication (voice and text) application that lets users “make a direct, decentralized connection to someone they trust.” 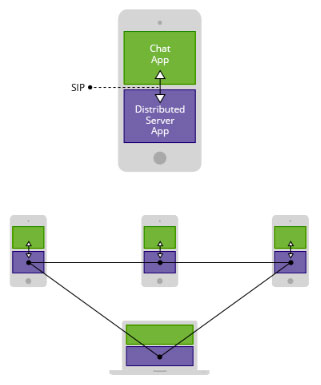 “Messaging and voice applications currently available all rely on central servers. These central repositories of metadata are the target of choice for snooping government agencies and hackers alike,” explained Farid Fadaie, head of the BitTorrent Bleep project.

“Now, consider that at BitTorrent our engineers have over a decade of experience building products for millions of users based on decentralized infrastructure. This has given us the unique expertise to build a communications platform and product with a strong distinction from the current offerings: no servers required.”

Jaehee Lee, a senior product manager at BitTorrent, says that Bleep can freely be used by journalists that want to keep their sources anonymous, diplomats looking to keep their reports private, and businesses that need to keep their communications safe from industrial spies.

Unlike traditional messaging services, where a chat app establishes a Session Initiation Protocol (SIP) connection with a central server app, Bleep does the same with a distributed server app.

This means that there is no central central repository of metadata – not because the company does not store it, but because they never have it. It also means that the person who wants to talk with someone must go search for them through nodes (and this search is also not tracked.

“All links are encrypted .We are using secure encryption protocols such as curve25519, ed25519, salsa20, poly1305, and others. Links between nodes are encrypted. All communication is end to end encrypted,” Fadaie says.

Bleep got its name from the fact that the company does not see the metadata or the contents of the exchanged messages. “As far as we’re concerned, anything you say is ‘bleep’ to us,” noted Lee.

Bleep is apparently easy to use, but is still only available in pre-alpha and for Windows 7 and 8. Those who wish to test the app can sign-up here, but should be aware that there are surely glitches and bugs that have to be ironed out.