Privacy App is based upon the company’s counterveillance technology. It digs deep into the privacy risks of Android devices so consumers will know which apps are spying on them. It shows users of smartphones the dangers inherent in simply trusting their anti-virus software to protect them in online banking and other high-risk transactions. 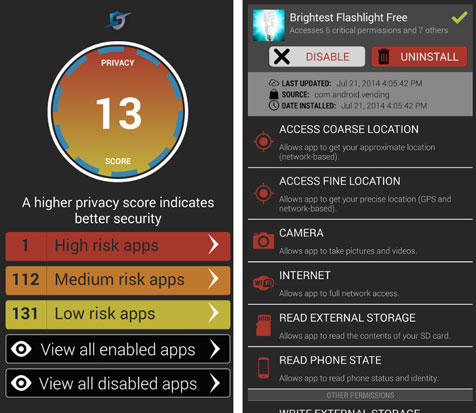 After 14 months of developing the technology and testing over 90,000 apps in the Android Play store, SnoopWall has discovered that at least 20% of these apps have permissions they don’t need, making Android one of the most spied upon operating systems on the marketplace today. Some apps will run in the background just waiting for the unsuspecting user to say something important or type in a password, for example. Apps can take pictures without even turning on the webcam LED, so users are at tremendous risk and exposure of identity theft.

Privacy App provides the privacy “risk score” for app categories with the most critical apps listed at the top – including banking and financial transaction apps which have the highest need for security/privacy and typically have poor privacy risk scores.

The app uses SnoopWall’s patent-pending “port authority” technology to determine which ports are being used to spy upon end users. It helps smartphone and tablet owners track the origin of apps and where they might be connecting to as they siphon personal information off of the device.

It also makes it easy to uninstall or disable an app when possible. Whether a malicious application (malware) is known or unknown (zero-day) by most antivirus vendors, Privacy App can detect when an app is trying to spy on you by the behavior of the app.

The app audits your favorite banking apps for security flaws, and discovers if your antivirus software actually works.