FinSpyMobile, the mobile spying software sold by German company Gamma Group, can’t be installed on iPhones that have not been jailbroken, shows one of the documents recently stolen from the firm and leaked online by a still anonymous attacker.

The malware – intended to be used by law enforcement and intelligence agencies against criminals but is allegedly also used against political dissidents, activists and journalists – can eavesdrop on calls and Skype calls, access messages, access data stored on the phone and SIM, trace the location of the phone, as well as use the device’s microphone to listen in on conversations happening in the vicinity of the device.

It’s meant to be operated remotely, and can apparently be installed on BlackBerry phones, and phones running most versions of Android, Symbian, and Windows Mobile. 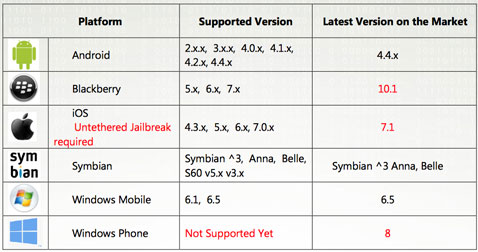 Windows Phone users are safe for now as the malware has not yet been modified for that particular platform, but iPhone and iPad users have also nothing to worry about as long as they don’t jailbreak their iOS device.

Apple has long been set on keeping a tight control on how its devices should be used, and the devices’ security aspect is not an exception, noted WP’s Craig Timberg.

Keeping your iPhone in the state the company intended it to be (not jailbroken) provides many protections for the user, including default disk encryption and a messaging system that apparently makes it impossible for third parties to intercept messages and decrypt them.

Unlike Android users, iPhone users that have chosen not to jailbreak their device can download and install software only from Apple’s official App Store. The company keeps a close eye on the store, and does a good job at keeping malware from it – unlike Google with its Play store.

Also, many Android users are not adverse to downloading apps from third party online marketplaces, which are often rife with malicious apps.

While this is all good news for devoted Apple customers that don’t feel the urge to tinker with their phones, the leaked document is datad April 2014. It is possible that Gamma International has solved this particular problem by now, and it’s also possible that other companies offering surveillance software have other solutions that have.