Excited about the new Wave iPhone wireless charging technology and can’t wait to try it out? Please don’t – it’s a hoax. You risk damaging both your smartphone and your microwave.

The hoax was started by Internet trolls populating the infamous 4chan forum, who created a credible ad for the bogus feature and began propagating it online under the hashtag #AppleWave: 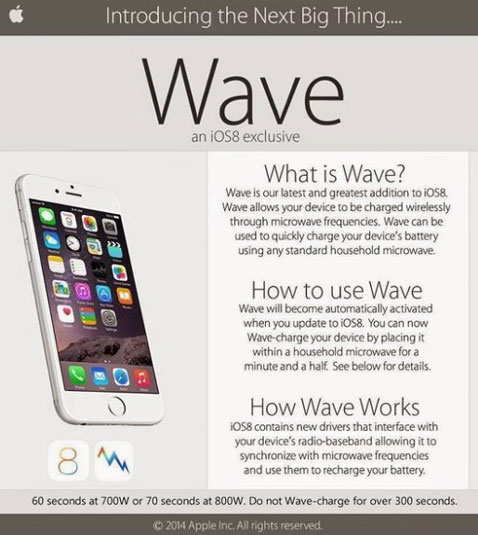 To widen the ad’s reach and improve the its chances of success, other 4chan users were urged to spam reddit, Tumblr, Twitter, Facebook and other social networks with it, and to talk about how amazing this feature is.

Unfortunately, it seems that no matter how illogical the claim is, a number of iPhone users have fallen for it.

While many users found the hoax fun and helped spread it, the fact remains that it could be dangerous, and less tech-savvy users should not be encouraged to perform the bogus charging process.

The popularity of Apple’s mobile devices and the recent release of its latest versions along with that of iOS 8 is being heavily misused by online scammers.

Another iPhone-themed hoax that is currently doing rounds on the Internet is the fake news that a number of iPhone 6 phones have been contaminated with Ebola during manufacture and are helping the virus to spread.