A two-year study of over 850,000 Facebook scams by antivirus software provider Bitdefender has revealed that scammers have infected millions of users with the same repackaged tricks. The in-depth study was conducted on scams spreading across the UK, the US, Europe and beyond. 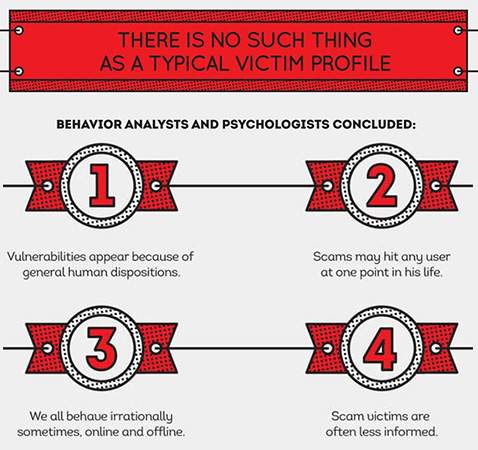 The team of behavior analysts and psychologists at Bitdefender analyzed the top five scam categories and revealed there is no such thing as a typical victim profile: anyone can fall victim to a Facebook scam, such as the classic “guess who viewed your profile’ ruse.

The analysis also revealed a lack of understanding about Facebook’s functionality. While almost half of social media e-threats prey on users’ curiosity to check who has viewed their profile, almost one in three scams attract victims with features that Facebook doesn’t even have, such as dislike buttons and different timeline colours.

Bogus giveaways, including free Disneyland tickets and game points, accounted for 16.5 per cent of the numerous scams in the last two years, while celebrity sex tapes accounted for 7.5 per cent.

A number of Facebook scams are monetized through fraudulent surveys or Trojans mining for banking and browser passwords. The research also revealed some worrying findings regarding user behavior.

“Though still a niche category, atrocity videos are gaining popularity on Facebook,” states Catalin Cosoi, Chief Security Strategist at Bitdefender. “Like and share schemes using horrendous images, such as maimed animals, suffering children, and tortured women, now account for almost 1 percent of all scams. The latest example is a malicious girl killed by her husband video, that has been infecting users with adware and malware.”

Bitdefender advises that the five most popular categories of scam baits used by cyber-criminals to trick Facebook users are:

Bitdefender advises users to keep their operating system, antivirus solution and other software frequently updated, as hackers can exploit vulnerabilities found on systems. Users should also avoid completing Facebook surveys and sharing or liking websites to view a video, and they should not install updates requested by viral videos.