Confronted with new breaches reported in the media every week, nearly two out of three Americans (61% believe their personal data is not secure, according to PKWARE. Theft of financial and identity information caused the most concern among U.S. respondents in the survey, with the leading data at risk cited as Social Security numbers (55%) and banking information (57%), including credit cards. 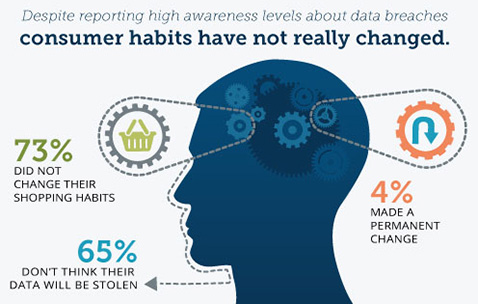 Even as the cost of data breaches soars, 35% of those polled think their data will likely be stolen next year. People feel strong, negative emotions when hearing about yet another company’s data breach. About half (49%) are angry, and 43% feel powerless or fearful and anxious. One in three people feel apathetic about the situation.

In the wake of recent breaches into public cloud environments, personal data has never been more vulnerable. When personal data is stolen, 42% of those polled think the reason it most likely happened is because hackers stole the personal data and one in three people (36%) say a company’s existing security technology was inadequate to protect their data.

Long seen as latecomers to security adoption, Millennials are much more likely than older people to think their data will be safe in the next year, according to the survey. Seventy-two% of those 18-34 find it implausible that their data will be stolen in the next year, as compared to only 57% of those ages 45-54. The younger set also were least likely (79%) to change their shopping habits after the Home Depot and Target security breaches.

Most people (69%) polled say they have not personally experienced data theft, yet more than half (58%) say they know someone whose data was stolen. Nearly a quarter (23%) of those polled report their financial accounts were stolen and 12% say their personal files were stolen.

Despite growing concerns about hackers shifting their attention to medical fraud, only 36% are worried about the theft of medical records.

Despite reporting high awareness levels, significant worries and negative emotions about data theft, most people (73%) did not change their shopping habits at all after the Home Depot and Target security breaches. Only 14% of responders made a permanent change in their shopping habits for all retailers.

Across all age ranges, men and women generally feel just as angry and apathetic about data breaches in the news. However, women are more likely (47%) to report feelings of fear and anxiety as compared to men (38%).