The malicious Tor exit node located in Russia that added malicious code to the software downloaded by users has been tied to the APT actors wielding the MiniDuke backdoor.

“The malware used in this case is, however, not a version of MiniDuke. It is instead a separate, distinct family of malware that we have since taken to calling OnionDuke,” say F-Secure researchers. 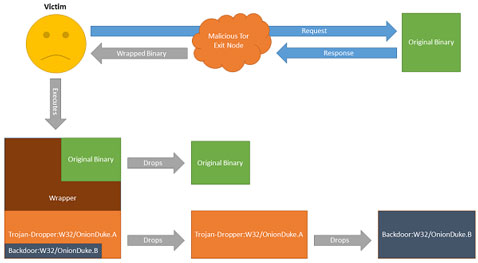 The malware attempts to connect to C&C URLs hardcoded in the configuration file – all five C&C domains seem legitimate, but compromised by the attackers – and if it succeeds, it downloads additional malicious components onto the infected computer.

The attackers are after data: login credentials, system and software information, and so on.

The thing that made the researchers tie this particular campaign to the MiniDuke-wielding APT group is the fact that one of the components contacts a domain registered in 2011 by a person (using an alias) that registered a host of other domains that have, since then, been used as C&C domains by MiniDuke.

“However, it would seem that the OnionDuke family is much older, both based on older compilation timestamps and also on the fact that some of the embedded configuration data make reference to an apparent version number of 4 suggesting that at least three earlier versions of the family exist.”

What’s also interesting to note is that apart hitting random Tor users, OnionDuke has also been slung at European government agencies via a targeted attack (the infection vector is still unknown).

It would seem that the APT group also engages in lowly cyber crime attacks against random Internet users, perhaps as a way to pad their own bank accounts in the pauses between cyber espionage campaigns.

“It’s never a good idea to download binaries via Tor (or anything else) without encryption. The problem with Tor is that you have no idea who is maintaining the exit node you are using and what their motives are,” the researchers noted, and advised users to use VPNs to protect their connection all the way through the Tor network.