US-based NGO Freedom House has published its fifth annual Freedom of the Net study and the results are upsetting: internet users in nearly half of the 65 countries assessed in the report have experienced tightening of internet freedom.

“Between May 2013 and May 2014, 41 countries passed or proposed legislation to penalize legitimate forms of speech online, increase government powers to control content, or expand government surveillance capabilities,” the researchers noted.

“Since May 2013, arrests for online communications pertinent to politics and social issues were documented in 38 of the 65 countries, most notably in the Middle East and North Africa. Pressure on independent news websites, among the few unfettered sources of information in many countries, dramatically increased. Dozens of citizen journalists were attacked while reporting on conflict in Syria and antigovernment protests in Egypt, Turkey and Ukraine. Other governments stepped up licensing and regulation for web platforms.”

The interesting thing is that Edward Snowden’s revelations of widespread surveillance by the US NSA have been used by governments as an excuse to ramp up their own monitoring capabilities, which are, in most cases, subject to little or no actual judicial oversight.

These capabilities are often aimed at the political opposition and human rights activists, who are also often targets of increasingly sophisticated and personalized malware attacks.

Russia, Turkey, and Ukraine top the list of the countries that experienced the most significant decline in internet freedom.

“The Russian government took multiple steps to increase control over the online sphere, particularly in advance of the Sochi Olympic Games and during the ongoing crisis in Ukraine,” they explained. “In Turkey, the blocking of social media, limits on circumvention tools, cyberattacks against opposition news sites, and assaults on online journalists were among the most prominent threats during the year. Ukraine’s standing declined primarily due to violence targeting social-media users and online journalists during the Euromaidan protests, an increase in cyberattacks, and new evidence reveal- ing the extent to which the administration of ousted president Viktor Yanukovych had been conducting online surveillance of activists, journalists, and opposition leaders.”

In this year, Iran maintained its position as the worst country for internet freedom, and is followed by Syria and China.

Iranian internet users promoting Sufism and engaging in digital activities considered threatening to the government have been punished with lengthy prison sentences, Syrian citizen journalists were killed and are target with spying malware, Chinese online dissenters and Uighur activists were threatened, arrested and imprisoned.

According to the results, the countries with most internet freedoms are Iceland, Estonia, Canada, Australia and Germany (click on the screenshot to enlarge it): 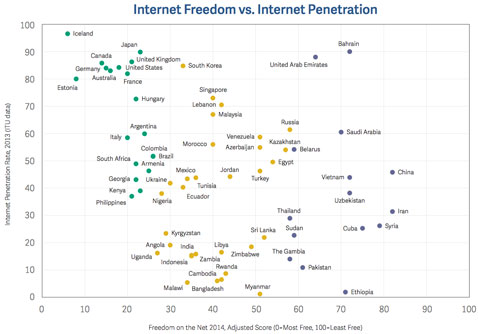 Not only do women continue to face immense cultural and socioeconomic barriers to ICT access, but are also increasingly subject to harassment, threats, and violent attacks for their online activities. Gay individuals, especially gay men, have been targeted with malware and via dating applications, by governments (Uganda, Russia, Egypt) trying to discover their identities in order to prosecute them or threaten them.

But not everything is so bleak, the study found. The NSA surveillance revelations also lead to ordinary users around the world becoming more engaged in securing their privacy and freedom of expression online, and some long-running internet freedom campaigns finally garnered the necessary momentum to succeed.

Also, some countries made steps forward for internet freedom, mostly in Latin America and the European Union.