Over the past few months, AdaptiveMobile has tracked an increase of spam complexity on messaging apps, such as WhatsApp, in the United States, Europe and India, and expects these attacks to continue through 2015.

These campaigns have methodologies and content similar to SMS messaging abuse threats, providing evidence that the criminal groups are now also targeting messaging apps as service providers have succeeded in reducing levels of SMS spam. 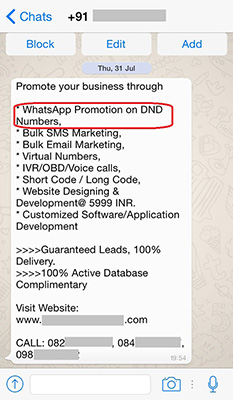 In particular, criminals are using WhatsApp to target users with text spam. Recent campaigns targeting WhatsApp users include investment spam messages sent from United States numbers to Europe, spam promoting fake luxury goods sent from Chinese numbers to users in Europe, and a marked increase of spam messages to WhatsApp users in India from numbers in the United States and India.

In countries such as India, the crackdown on SMS spam has led to a corresponding increase in WhatsApp spam activity, as criminal groups exploit loopholes in the regional anti-spam legislation. This activity has driven the cost to spam via WhatsApp to record lows, with prices for WhatsApp advertising text messages bought in bulk now as low as 0.21 Rupees (around 0.3 of a US or Euro cent).

Intelligence also indicates the rise in VoIP operators has made it easier for spammers to deploy new techniques to target subscribers, by switching numbers and creating new accounts to avoid detection and assure continuity in their campaigns worldwide.

“The migration of criminal groups to OTT services for spam and malware campaigns is a concern, but not impossible for the industry to address,” said Cathal McDaid, Head of Data Intelligence & Analytics at AdaptiveMobile. “WhatsApp has already put in place some measures to ensure that users do not receive spam messages. The challenge for all messaging service providers is to continue to evolve and implement safeguards to address the trend of spammers spreading from SMS channels to also exploiting OTT messaging apps. AdaptiveMobile will continue to share its research and analysis with the service providers to help ensure that messaging abuse can be contained in a shorter amount of time.”