Online gamers are often targeted by cyber thieves, as their game accounts hold coveted items and/or funds to buy them. In order to gain access, the crooks usually set up clever phishing schemes or try to make gamers install spyware so that they can get their hands on the login credentials.

Malwarebytes has recently spotted a fake version of the official website of Razer – the developer of Razer Comms, a popular voice chat and messanger app for gamers – that supposedly offers the app for download (click on the screenshot to enlarge it): 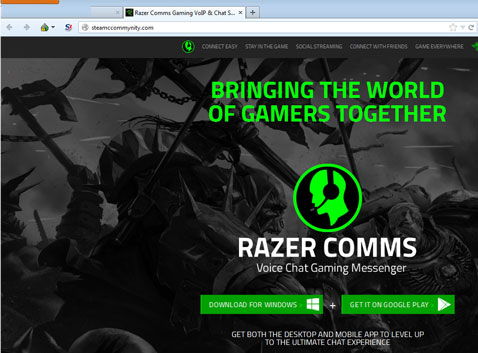 While the link to the Android version of the app leads to its legitimate page on Google Play, the link for the Windows client triggers the download of image.src, a file that holds a passwords-stealing Trojan.

The good news is that the currently offered malware does not seem to work as it should, but that doesn’t mean that the crooks will not exchange it for a working one soon.

“In most cases that we see, the name of the game is luring the victim outside of the trade system window. If you’re being sent links to ‘previews’ of items in Steam chat by strangers who started messaging you ten minutes ago? You may be on your way to a bad day,” researcher Chris Boyd pointed out.

“Whether we’re dealing with links to executables, so-called pictures of in-game items which turn out to be .scr files, login pages asking you for credentials and / or uploads of your SSFN, you should do your very best to avoid them all.