Jeb Bush, who might end up being a candidate in the next 2016 US presidential election, has made a clumsy misstep in his attempt to provide “transparency” into his two turns as governor of Florida: he published a huge batch of emails he received both from his constituents and other people without redacting sensitive information contained in them.

When the emails were initially made public on JebBushEmails.com, they were entirely unredacted, and personal information such as the senders’ names, email addresses, home addresses, phone numbers, even social security numbers, healthcare and other sensitive information was there for anyone to find, collect, and potentially misuse.

Since this fact was discovered, researchers have been going through the email dump in search for sensitive information, and found plenty: 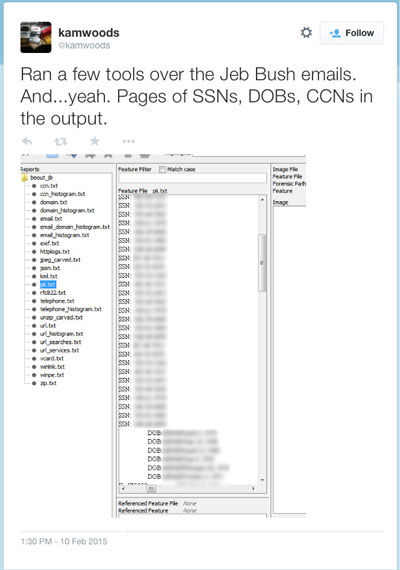 In the meantime, the emails have been redacted.

According to The Verge, a spokesperson for Bush has pointed out that these emails are public records, and as such “are available at anyone’s request under Chapter 119 sunshine laws.”

Nevertheless, social security numbers are exempt from public disclosure under the same law, and that information, at least, should have been redacted from the emails.

Also, whether the senders were aware that their emails will be considered public record is still debatable. What’s definite is that Bush and his staffers knew they would be.

As Mark Stockley noted, “there is a real and substantial difference between releasing specific emails in response to Freedom of Information requests and making hundreds of thousands of emails public.”

Jeb Bush or his team might ultimately not be sanctioned for this blunder, but it will definitely leave a bad taste in the affected individuals’ mouth, as well as that of the general public.