The number of patients affected by medical identity theft increased nearly 22 percent in the last year, an increase of nearly half a million victims since 2013. 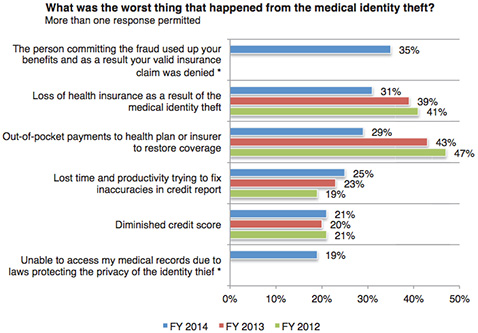 In the five years since the survey by the Medical Identity Fraud Alliance began, the number of medical identity theft incidents has nearly doubled to more than two million victims.

Medical identity theft is a national healthcare issue with potential to cause life-threatening and hefty financial consequences for consumers. 65 percent of victims surveyed paid more than $13,000 out-of-pocket costs to resolve the crime.

“Given the high volume of medical records and personal information leaked by healthcare providers and payers, organizations are now more focused on reducing how much unprotected PHI they store and shrinking the target hackers go after so that fewer patients are exposed to the risks of medical identity fraud,” said Identity Finder CEO Todd Feinman. “Identity Finder was glad to participate in a study that explains what the implications of that unprotected data are for users—and the companies who provide services.”

Noteworthy takeaways and key findings from the report include: