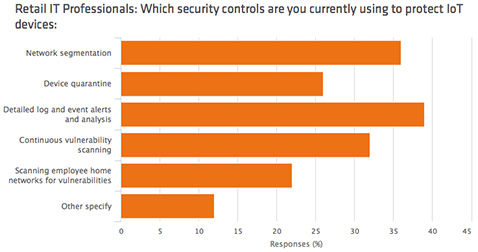 “It’s imperative that enterprises establish the ability to continuously monitor their network for unknown devices and applications, validate them against a trusted reference point, and quickly remediate weak or unsafe configurations,” said Dwayne Melancon, CTO for Tripwire. “Standards, machine-to-machine learning and continuous security configuration management can significantly accelerate progress toward this goal.”

Key findings from the study included:

“The results of this research reflect many of the challenges retail security teams face,” said Ken Westin, security and threat analyst for Tripwire. “One of the most positive findings is that retail organizations can dramatically improve security by focusing on a few key fundamentals. After all, you can’t keep anything secure if you don’t know it’s on your network.”

The study also revealed that 35 percent of retail IT professionals have inadequate visibility into the security of common devices already on their networks such as routers, switches, modems and firewalls, and 51 percent don’t believe they can effectively communicate the security risks associated with IoT devices to the C-suite and corporate board.

The study was conducted by Atomic Research between July and September 2014 and compared the attitudes of 276 retail executives and IT professionals in the U.S. and U.K. with 431 respondents in the same roles in energy and finance industries.